This week I had the pleasure of meeting and working with The Strypes! If you don't know who they are I suggest you check out the documentary about them on BBC4 (Here is the link The Strypes: Best Thing Since Cavan)
They were a great bunch of talented guys and they deserve all the success they are receiving. They reminded me of the spirit of Dr Feelgood and early The Who sound.
I should also mention support from the Raglans who did a really energetic set, embracing their Irish side. They are well worth checking out. 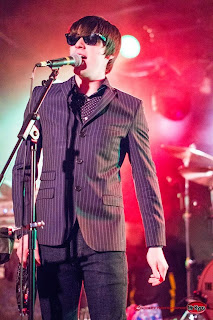 The Strypes - Image by Damian Godley

In complete contrast to The Strypes  I also worked with Larry Miller this week. I have had the opportunity to work with Larry Miller a number of times now and he is a phenomenal blues guitarist and song writer. It is always a pleasure and never a chore working on gigs like this one. Larry played a moving tribute to BB King who sadly died this week, the drummer of Larry's band was privileged enough to have played with the King himself.